Some good news! The Planned Parenthood abortion facility in Sioux Falls has shut down due to travel concerns related to the coronavirus. This is the last abortion facility left in the state, meaning the state is at least temporarily abortion-free. It remains to be seen if the facility is able to open up after the coronavirus. Connor McCarty, the Midwest Regional Coordinator for Students for Life of America wrote on Facebook, “Friends, under the gloom of quarantine we have fantastic news to report! It was confirmed earlier this morning that Planned Parenthood of Sioux Falls, South Dakota has CLOSED its

No, Pro-Lifers Don’t Have to Adopt to be Pro-Life

At Students for Life, we hear it all and we’ve seen it all. People have hit us with jump ropes and thrown human excrement at us in front of government buildings, college students dress up as vaginas and protest our displays, students approach us on campus and argue the morality of euthanizing children up through toddlerhood… You name it, we’ve been there.

But today, we’re going to focus on one you may have heard before. “You aren’t allowed to be pro-life unless you adopt.” And this one is interesting, because almost every single pro-lifer will immediately feel defensive on this one. Just remember it’s a bit irrational.

What To Say First

Everyone who feels called to adopt… should adopt. The desire to nurture children transcends political party and opinion on abortion; it’s a human quality (for most people, anyway). Adoption is amazing and has allowed countless parents and children a new chance at a loving family. As Mike Pence recently noted, there are about the same number of couples hoping to adopt as there are abortions each year. That seems like an easy math equation.

This isn’t to say adoption is always painless. Pro-lifers acknowledge the emotional difficulty that comes with carrying a child and parting ways after birth. But to live the human experience is to encounter pain. It can help us grow and change as people; what is difficult is not always bad.

Multiple Students for Life team members have personal experience with adoption, and plenty of national activists do as well. Ryan Bomberger is one of them; he was conceived in rape, adopted, and has adopted children of his own. Here, he speaks on his experience at a rally in Alabama:

“You can’t be pro-life unless you adopt” is an argument that fails to hold up logically. You do not have to take a specific action in order to have the right to form an opinion on a topic. This idea doesn’t hold up anywhere else. You don’t have to be an African-American to believe that slavery was wrong. You can believe that human trafficking is wrong without donating to Polaris or another anti-trafficking organization. Your beliefs should motivate your actions, but actions are not pre-requisites to belief.

It’s a common tactic that only seems to be thrown at pro-life people… despite not being applicable to any other social justice issue. You don’t see anyone approaching pro-choice people and saying, “You aren’t allowed to be pro-choice unless you counsel women with Post-Abortion Syndrome.” It’s a bullying tactic that’s typically only dished with malicious intent.

Further, not everyone is able to adopt. Hypothetically, consider a single woman with a small income that only supports herself. She’s not in a position to adopt a child; is she allowed to sidewalk counsel outside Planned Parenthood because she believes abortion is wrong? If an argument only holds up a little… it doesn’t hold up at all.

The neat part is that pro-lifers do adopt. Heavily. Pro-life people adopt en masse, despite not having to in order to “earn” the title of being pro-life. And if we aren’t adopting, we’re participating in some other active, supportive service to benefit women facing unplanned pregnancies. 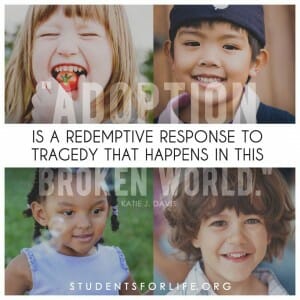 It’s us who are running the 17,000+ pregnancy resource centers nationwide that provide free counseling, material resources, parenting classes, and sometimes even medical attention to those in need. And there are many more organizations in addition to literal pregnancy centers (such as maternity homes, charities, church organizations, and more).

So, this may be worth noting in a conversation in which someone is suggesting you aren’t “allowed” to be pro-life. But the lack of logic in the original accusation stands: You are allowed to believe a bad thing is wrong. Period. Copyright © 2020 Students for Life of America.